Lower Wye
One km of coarse fishing from both banks downstream of the main road bridge, to the point of confluence with the river Trothy. This stretch known locally as “The Dukes Water” is a premier salmon fishery and coarse fishing is not permitted during the salmon season. Coarse fishing is primarily for Barbel, Chub and Grayling.

Upper Wye
Approximately 1km of coarse fishing on the Hadnock road section of the river Wye, north of Monmouth.

Barbel are to be caught along almost all of our Wye stretches but thick summer weed growth restricts the flow and makes legering impossible in some places. So look for the clearer swims with a greatest flow specially when the water is low, when in some places you can use your waders to float fish the runs between the weed.

September onwards are the best months when the canoe traffic is less. Warmer spells even in November / December can still be very productive when most weed has died off.

Chub are to be caught in most places were the barbel reside but are better caught on bread, corn, maggot and meat baits although the occasional one comes to a pellet or boilly meant for barbel. Early in the season eels can be a problem on meaty baits.

Pike are found in all reaches but look for the slacks and eddies close to the banks and under cover from bank side trees and vegetation overhang.

The banks are mostly steep high and overgrown in many places so the water is not accessible everywhere. If you are new to our waters you really need an hour to reconnoiter before you fish.

River Monnow
3 miles of fishing on the River Monnow.
A combination of fly fishing for Trout and Grayling as well as coarse fishing for Chub, Dace, Perch and Roach. 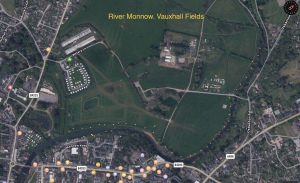 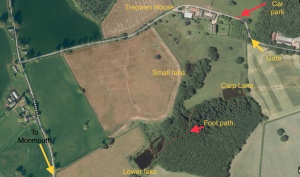 Trippenkennet Lake
Since 2012 we have leased some space on a non-exclusive basis at Trippenkennett Lakes.
http://www.tkfarm.co.uk/fishing.html

Gauge map: check the water level in your region and get other info about your waters